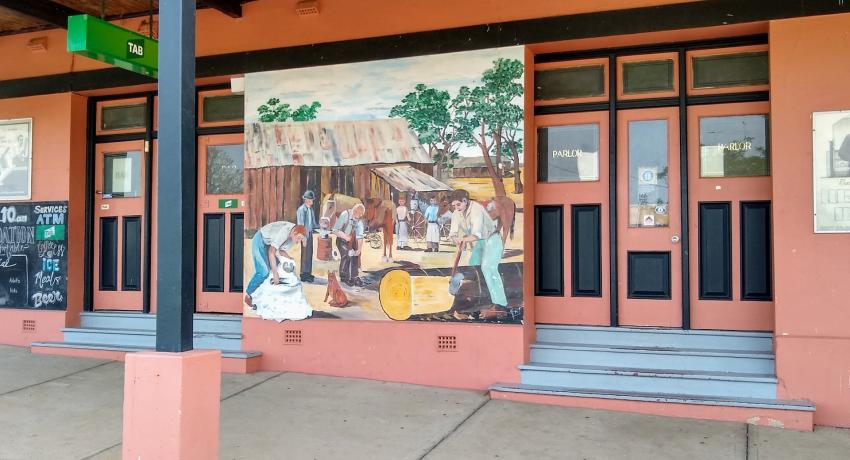 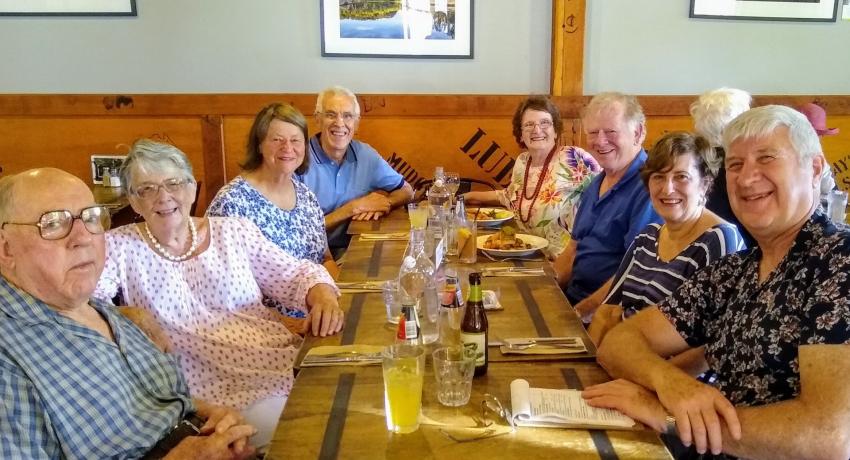 We just had to return to the “Shelley Mae” shop to hunt for Brian’s beer glasses amongst the vast array of “antiques and collectables”.  The owner, Harold (with a blue shirt and braces in the attached photo), and his would-be executor, Joe, were real characters and were in the shop really to pass the day.  We found Brian’s glasses, purchased 8 and left 6 for another day. We admired a complete, stunningly beautiful Shelley afternoon tea set, couldn’t find any pudding basins, but found 2 dirty and rusty pincers for extracting nails for Brian and 2 pigs for a present for Jessie.

Walking up and down Mendooran to take photos of the street art (see photos) was hot work in the 38 degree heat and we purchased 2 Capillos, their icy contents being very welcomed as we set off to Dunedoo.

A purchase of a cheeky bathmat was made at a “buy from the bush” gift shop in Dunedoo, in addition to the big splurge of 2 bread rolls. There were 4 huge fire engines in a second hand shop, but we resisted the temptation to buy one for Austin

Some of the residents had proposed building a Big Dunny as a tourist attraction in Dunedoo but thankfully it was canned. (The name is actually derived from a local Aboriginal word meaning "swan", which are commonly found in the area's lagoons.)

It was a pretty drive from Dunedoo and we were pleasantly surprised with the air quality as we approached Gulgong.  It was good also in Mudgee and Rylstone, although we could see the smoke from the ever-expanding Gosper Mountain fire (known locally as the Kerry Ridge fire) on the horizon from the latter township.

In true country fashion, Ellen opened her Nanna’s Haberdashery in Kandos especially for me so I could buy some ribbon for Playgroup craft. She also used her chairman’s key to let me into the Charity Shop next door to look for pudding basins.  Both shops are not-for-profit, and all money is given back to the community; they give money to local schools and community groups and currently are also supporting the firies, many of whom are staying in local motels.

We met Darryl and Val at the air-conditioned Rylstone Uniting Church hall where Merilyn Mosher was serving Devonshire teas for the community.  We were joined by Lorraine and Barry and a bit later by Greg Smith, the minister from Mudgee Uniting Church.

We changed the night’s booking for dinner, at The Shed Bistro, The Globe Hotel, to take account of the reduced numbers. We learnt that The Globe Hotel had been taken over by two guys from Sydney.  Phil had been the catering manager of the NSW Parliament House and now looked after the bistro and Pete, who had been in the Premier’s Department, looked after the bar.  They were relishing the stress-free lifestyle and obviously had become part of the Rylstone community.  They were collecting as donations, the change from drinks and when the mug reached $70 they’d shout the firies, who were staying in the pub, a drink.

We walked down to the little supermarket / gift shop / grog shop and purchased some local honey.  We had been told that the proprietor was supplying drinking water to the firies, charging only $9 for whatever he was doing.  It obviously impressed the locals who were chipping in $9 a time,  so we gave him $18 to help him.  Across the road was a recommended Yum Cha, which we booked for lunch the following day.

Merilyn and her husband, Max, joined us for dinner at The Shed Bistro. Brian and I had the biggest Caesar salads we’d ever seen; country servings are certainly bigger than city’s.  The food was good, it was cool and we stayed chatting for quite a while getting to know each other.